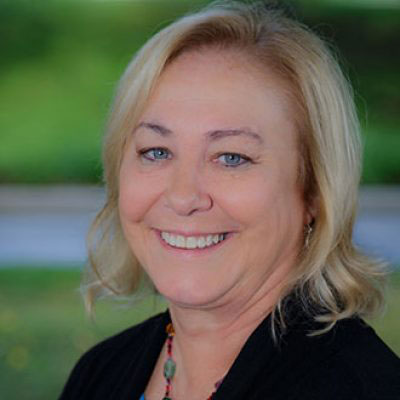 Dental has always come naturally to Dr. Lynne Schopper. As the third child in a family of five, she took advantage of the unique opportunity to spend time with her father, Dr. George F. Schopper, by helping out in his dental office. At age 14, she began working in her father’s practice as an assistant, receptionist, and lab tech – wherever she could be used.

The invaluable experience she gained while working in the office through high school and community college furthered her interest in dentistry and led her to attend Creighton University, where she received an undergraduate degree in chemistry. She graduated from the University of Missouri School of Dental, at which point she returned to the family practice, where she furthered her learning by working directly with her respected father. “He taught me the value of the work we do and to treat each person who walked into the office as a whole person with kindness, respect, and dignity.” This warm and compassionate style of care stuck with Dr. Schopper and has become the core of her practice to this day.

Being a woman in the field of dentistry has allowed Dr. Schopper the opportunity to inspire young ladies in the community to pursue their professional dreams. Her graduating class contained only 14 women and 146 men! Pursuing dentistry when women in the field were considered a novelty set Dr. Schopper apart and allowed her and her father together to offer the best of both worlds to the community. She cherishes her part as a role model in the community and encourages all young women to follow their own distinctive path.

Dr. Schopper is a member of several respected organizations. Throughout the years, she has volunteered to serve on committees for organized dentistry. In 1998, she became the first female president of the Fifth District Dental Society. She has served as a delegate to the Kansas Dental Association (KDA) and remains an active member. Dr. Schopper is also an active member of the Academy of General Dental (AGD), American Association for Functional Orthodontics (AAFO), American Academy of Implant Dental (AAID) and the International Congress of Oral Implantologists (ICOI).

Dr. Schopper’s work and talents in the field of dentistry have gained recognition, and she’s been inducted into both the prestigious International College of Dentists and the American College of Dentists. She was married to the late Frank Theisen, D.D.S., M.S., an oral surgeon and Associate Professor at UMKC School of Dental. Together, they have two wonderful children, Danny and Katie. Dr. George F. Schopper’s motto was “treat each person as if they are your family.” Dr. Lynne Schopper invites you to experience the caring family and community atmosphere at Garnett Family Dental. 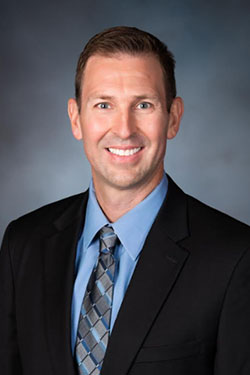 Dr. Grosdidier aspired to be a dentist ever since he can remember. He grew up on a dairy farm in southeast Kansas, where he spent most of his time either working with his father and grandfather or practicing and playing sports. Although Dr. Grosdidier loved life on the farm, he knew that he wanted to become a dentist.

He attended Kansas State University on a football scholarship, enjoying his time as a tight end, and completed his Bachelor of Science degree in biology and pre-dentistry. Balancing grades and athletics took a lot of time and hard work, but Dr. Grosdidier succeeded with honors both on the field and off.

After graduating from Kansas State University in 1998, he attend UMKC School of Dental, where he was able to start pursuing his passion. He graduated in 2002 and has been practicing in the Kansas City area since. As a dentist, Dr. Grosdidier takes pride in taking the time to get to know each of his patients and their individual needs by using a conservative approach to dentistry. He enjoys serving the whole family. It allows the practice the opportunity to really get to know their patients. Patients are not just a number, and many of them go on to become lifelong friends.

Dr. Grosdidier is a credentialed Diplomate and active Board Member with the American Academy of Dental Sleep Medicine (AADSM) Annual Program Committee, a member of the American Dental Association (ADA), Kansas Dental Association (KDA), and Academy of General Dental (AGD). He maintains the dental clinic at the Kansas State School for the Blind in Kansas City Kansas. He believes that it is both a privilege and an honor to work with the students and the staff at this school. Dr. Grosdidier and his wife, Kim, met in college and have been enjoying married life for more than 16 years. They have four daughters: Brynn, Josie, Elise, and Ava. He is an incredible dad who devotes his life to his family. Spending time with his girls is his favorite pastime. Dr. Grosdidier also enjoys working out, spending time with friends, and going on an occasional fishing trip. He is an avid sports fan and enjoys keeping up with all the local teams. 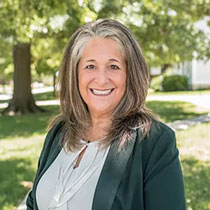 Dr. Sandi Otipoby has always loved helping people and her community. As one of seven children growing up, she learned helping others was her passion, and large families require everyone to look after one another. Dr. Otipoby's father served our country in the Air Force. Their family moved throughout the US growing up until settling in Diamond, Missouri, a small town located southeast of Joplin, where they lived on a farm.

After dental school, she moved to Garnett, Kansas, and started practicing dentistry. General dentistry has always been Dr. Optioby's favorite because of the variety of dental procedures you can help patients with every day. Helping people smile gives her joy.

"Patients tell me I have a gentle touch. I want to help my patients and my community, and this is my chance."

Her love for helping people and animals started at a young age and continues to this day. She is active in the local 4-H and enjoys gardening and raising Lamancha dairy goats. Producing milk, goat cheese, and goat milk soap is a part of raising goats and takes a lot of hard work.

Dr. Optioby and her husband, Dwight Nelson, live on a farm in Garnett. They have two children; Amanda Nelson and Derrick Nelson. Amanda is a dental hygienist in Manhattan, Kansas, and Derrick works for a Wisconsin milling company. They are proud to call Garnett their home. 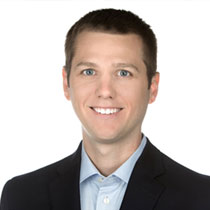 Dr. Robert Carlson is a native of South Dakota. He received his Bachelor of Science degree in Business Administration from the University of Nebraska-Lincoln in 2012. His older sister, a dentist, inspired him to enter the dental field as well. He then completed his Doctorate of Dental Surgery at Indiana University.

While studying in Indiana, Dr. Carlson enjoyed volunteering at the Jane Pauley Dental Clinic, and he continued serving the Rosebud Indian Reservation in South Dakota during breaks.

After graduation, Dr. Carlson completed his residency in Advanced Education in General Dental at the University of Missouri-Kansas City School of Dental. This program furthered his expertise in the placement of dental implants and completion of complex cosmetic and restorative dentistry. These are areas of special interest to him, and the years of advanced training during his residency allowed him to further his clinical skills in these areas. Dr. Carlson has also completed additional training in Invisalign™. He is a member of the American Dental Association and places a high value on providing best- in-class care for our patients.

Outside of dentistry, Dr. Carlson enjoys playing tennis and golf. Despite going to Indiana and UMKC for his advanced education, he has maintained his loyalty to Husker football. Besides sports, he spends most of his time with his wife. They enjoy traveling and hiking together. 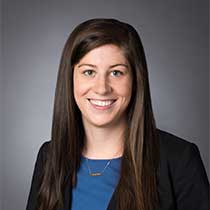 Dr. Clare came by her Midwestern family values honestly. As the only girl of five and the 2nd oldest in her family, she naturally stepped into a nurturing role by helping take care of her siblings. And her family’s already-close ties bound even tighter as they supported one another through their moves to 4 different cities throughout the Midwest. The family settled in Lincoln, NE by the time she was 12.

Dr. Clare fondly reflects on those times as instrumental to building her character and instilling caregiving as a priority in her life. So, when her older brother, Frank, considered a career in dentistry, it was no surprise that she would want to commit her professional life to help others.

A graduate of the University of Nebraska-Lincoln, Dr. Clare immersed herself in student life by being involved in her sorority, Chi-Omega, and working at the UNL Health Center. During her time as an assistant, sterilization tech, and receptionist, it became abundantly clear that Dr. Clare had a future in dentistry.

As a student at the University of Nebraska Medical Center – College of Dentistry in Lincoln, she belonged to the American Student Dental Association (ASDA) and the American Dental Education Association (ADEA). While in her 3rd year, she was chosen to present her research at the Annual ADEA Conference in Orlando, Florida.

Calling Kansas her new home has been an effortless transition for Dr. Clare with her homegrown Midwestern roots. She has immersed herself in the community by giving her time to The Children’s Place of Kansas City.

Dr. Clare and her fiancé, Aaron, enjoy spending time with their family in KC and Lincoln, being outside with their dog, Louie, working out, going to Chiefs games and Husker tailgates with her parents and brothers. 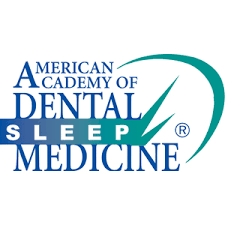